Get the the lifestyle of the Caribbean on your party. The Captain Morgan Spiced Gold 1.5L Limited Edition Barrel Bottle must have for any party. 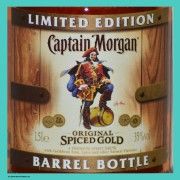 Although Captain Morgan in the strict sense not is RUM because its alcohol content is below 37.5% and it was flavored with natural flavors, so heard Captain Morgan but with around 54 million liters of emissions in 2004 of the largest varieties of rum World. Actually, there is the brand since the 60s; In Germany you will but heavily promoted only since about 5 years and was thus able to enormously increase your visibility.

Get the spirit of the Caribbean and the taste of Captain Morgan Original Spiced Gold® mixed with cola on your next party. Here at best-bottles.de you can find all the ingredients and the recipes for “Captain & Cola”. The original mixed drink with Captain Morgan and Cocal Cola.

There are no reviews yet.

This website uses cookies to improve your experience while you navigate through the website. Out of these, the cookies that are categorized as necessary are stored on your browser as they are essential for the working of basic functionalities of the website. We also use third-party cookies that help us analyze and understand how you use this website. These cookies will be stored in your browser only with your consent. You also have the option to opt-out of these cookies. But opting out of some of these cookies may affect your browsing experience.
Necessary Always Enabled
Necessary cookies are absolutely essential for the website to function properly. This category only includes cookies that ensures basic functionalities and security features of the website. These cookies do not store any personal information.
Non-necessary
Any cookies that may not be particularly necessary for the website to function and is used specifically to collect user personal data via analytics, ads, other embedded contents are termed as non-necessary cookies. It is mandatory to procure user consent prior to running these cookies on your website.
SAVE & ACCEPT
Scroll to top
Chriss Blog über 3D Drucker, Holzwerken und CNC